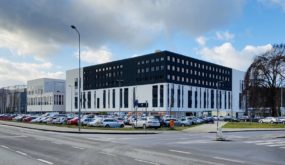 In the half of Janury 2021 has ŠKODA AUTO began operating in new highly modern centre for creating testing supporting constructions and prototypes. We are pleased, that we were part of this project.

Study was made by Arch.Design in 2017 by BIM method using Revit software. We were also providing architect’s supervision during following designing and building works. Newly constructed centre has architectonical design connected to current built-up area, created by three other objects.

New production of models and prototypes unites all production steps under one roof, which benefits for ecology as well as production invests. In short distance between teams will be spared 1 800 litre of fuels per year, which equals to five tuns of CO2 emission and the fact, that all storage is attached to car productions it degrees logistic expense as well.