Extension of logistic premises in Syrovice 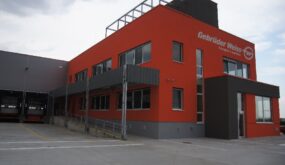 In last year we have been working on documentation for extension of reloading hall of logistic premises of Gebrüder Weiss Company in Syrovice. We are cooperating with INVIN company on this project, which is also as we are, the member of society AD Group.

First phase of project for logistic premises was processed in 2013-2015, when was realized construction of administrative building, reloading hall and two storage halls instead of originally planned six storages. Included was also almost of one mile road with circle crossroad.

After years our client has turned to us with request of editing the original aim of project. Instead of intended storage halls to design extension of reloading hall.

Iron-concrete skeleton of extension fluently continues on principals of construction solution of already built-up hall. Colour and material solutions was set-up by design manual of Gebrüder Weiss Company, that specifies also many other components, for example specific product of lights or loading technology.

As we have mentioned, we are co-working with INVIN company, that has role of project manager, technical supervisor and coordinator of safety and protection on work space. We are please to leave our mark together on this project.